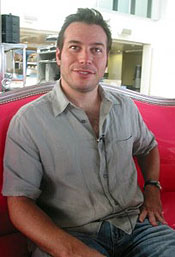 , then you're a fan of this Penn alum's work.

More about this alum and his new project with Paramount after the jump!

This week, Paramount Pictures bought the screen rights to TV writer Hank Steinberg's (C'91) two book mystery book proposal for Out of Range.  Per Deadline, the plot is as follows:


"It starts with a kidnapping. A husband see his wife snatched while he and their two small children watch helplessly. The stay at home dad strikes back and becomes determined to find her at all costs. It puts him smack in the center of a dangerous, clandestine world of international espionage."

I haven't covered Hank on this site before, but as mentioned above, he is the creator of the CBS series "Without A Trace

. Hank is definitely an alum to know about. Out of Range is Hank's first novel.