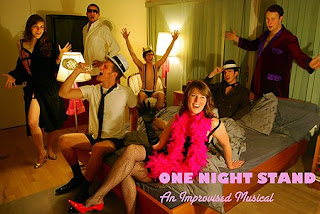 Last summer I attended a performance from Jonah Platt's (C'08, Off the Beat) One Night Stand Musical troupe. (he's the one in the white t-shirt, tie and hat above)

Not only was I blown away at how talented these kids were, but how quick they were to create an hour long musical based on a few words the audience suggested.

They are now back in LA this summer doing 5 weeks of shows before they head to NYC for the New York Musical Theater Festival this fall.


Get a taste of the talent here with these recent clips of Jonah and the ONS company below:


"Carpe Diem"
Carpe Diem (the show is called "Riding Weekend")-- it's only the 2nd scene of the show. After watching "the saddest news program on tv," two friends Dave and Roger decide they want to start living their lives to the fullest.


"Pot It In The Box"
The above show is called "the night that changed my life" -- my character, Billy, a young boy, has been pushed throughout the musical by his father and neighbor to grow up and become responsible, but all he wants to do is stay young and imagine things and play with his imaginary friend Peter. In the show's climactic scene, Maturity comes to Billy one night and tells him that if he wants to be mature enough to be with the girl from next door, whom he loves, then he needs to put Peter away for good, and "pop it in the box." (this was also the name of the audience-suggested song title that we had to sing).

Check out other Penn comedians HERE