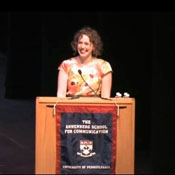 After the jump, watch the speech, find out about Vanessa's path from Penn to SNL, which group at Penn passed on the "Bayer magic", and why she didn't really want to get a role in a Planters Peanut commercial she was called in for!


In the video above, Vanessa delivers a humorous speech and recounts: