Her March Madness: 2 commercials booked in one month! 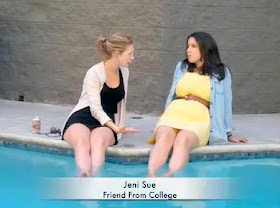 In her last episode, Jess told us about a national commercial she booked.

Since then she booked another one! (yep, another Penn alum to add to my growing Penn alumni on commercials list.)

After the jump find out:


Here's the scoop from Jess:


"The Starter Actress has had her own version of the famed March Madness. And what fun it has been! Da Da Daaaaa...I have two commercials that just started to air this week and I am beyond excited! One is for Bush's Baked Beans, definitely have the glam shot of me eating a big ol fork full of beans,

...and the other is a Sears Commercial. The Sears commercial was extra special because I actually got to shoot it with me Boyfriend! Yuppp Crazyy LA! We booked the commercial together as a couple! A little hint, trick of the trade if you will, casting directors and producers love when real couples come in together! My BF also went to Penn but for Law School.  Look at us Alum getting together and taking over the big screen.

This month, I auditioned for a feature film called Shattered Minds, which you see in the latest episode, and I had a callback! Wahoo..now waiting to hear about the decision. While at the second opportunity for that film, I got a call from CAA asking if I could go to FOX in two hours to audition for a guest star role in Zoe Deschanel's new TV show! Ummmm of course and ummm Starter freak out! Two hours? Oyyy. I made it thank god and luckily it was only a couple of lines that I had to look over. I was sooo excited because my tape was sent to the producers, which would be the last step before booking the role! I am still waiting to hear back which is always so nerve racking because I never know when they are going to make the decision.

I find myself now done with March Madness and realizing that it has turned into a bit of a waiting game. I am currently waiting to hear back from a horror film, and video game opportunity. Yesss video game. I was weirded out when I first heard that my manager wanted to send me in for it but then I learned more about the project and it seems really cool! Video Game companies basically shoot a feature film that the players then get to participate in. The game is part of one of the world’s biggest franchises and has become a respectable medium that blurs the lines between game and film. It would run from April to November and I would get so much experience with green screen and voice over work. Kinda cool right?

I am also moving forward with taking my reality series to TV! I have been in talks with LeftRight TV and just sent my materials to E Entertainment. I have been compiling a list of characters to start including in the show. I got it down to about 8 possibilities and sent in a brief bio on each person and how they are connected and help me along the way! Of course, everyone was rushing to be on the list. Some of my friends back east even offered to move to LA if they could be in the show! However, I was able to lock down a great group of people that I work with and am friends with in LA. One is a casting director that I am very close with and has been helping and supporting me since I came to LA. My manager agreed to be “the voice” on the other end of the phone but does not want to be shown. Unfortunately, I am running into that a lot with established people in the business because they don’t want to be in front of the camera..that is why they help from behind the scenes. I also am including one of my best friends, Jeni Sue, who I met in college and is now living in LA and writing. She is my total rock and is featured in my latest video! I have a meeting to discuss my list and the next steps this week! All very exciting.

I also turned the Big 25 in this episode! I am feeling really good things coming my way this year!

Yours Truly,
The Starter Actress"