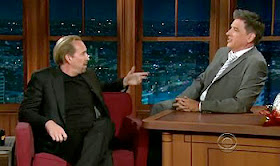 During his interview, Nic talks about his experience great white shark diving with the film's (Penn alum) executive producer.

After the jump, find out who Nic was talking about ...and other Penn alumni who have been affiliated wtih Craig Ferguson.

At 3:55, listen to Nicolas Cage talk about Norm Golightly's (C'94, Mask and Wig) face after he went shark diving ...and what Norm compared his experience to.


And here's the actual photo (yikes!) from Norm of the photo Nic refers to: 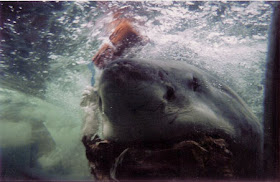 Per Norm, "I took this with a disposable underwater camera in south africa in 2004....that's about 16 feet of great white shark coming at our cage! You can see the tail in this distance"

While we're speaking about Craig Ferguson in this post, remember when...
...THIS Penn alum comic killed it on Ferguson's show?
...THIS "Good Morning America" Penn alum ABC entertainment news correspondent was obsessed with Craig Ferguson and Craig named her on his show?