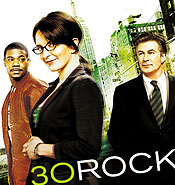 Elizabeth Banks (C'96) is sure making her way around to all the popular TV shows this season.

Just a few weeks ago Liz appeared on ABC's "Modern Family" and now she's about to grace "30 Rock" with her presence in at least four episodes.

According to EW.com, she will be playing Jack Donaghy's (Alec Baldwin's) love interest. Her sense of humor can definitely fit well into that show!

Looks like Liz is on the road to getting her own series one day...