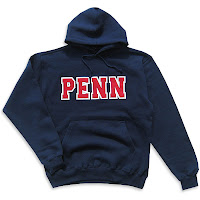 Because of how cold it's gotten here in Los Angeles, this morning I grabbed my Penn sweatshirt and headed to the gym. (yes, the same gym where I had my recent "not Penn state" story)

Within 5 minutes of me getting there, the "did you go to Penn" comment came out and I met Jared and then Brice, 2 alumni from the class of 2000 who I believe were both in Sigma Alpha Mu. (that makes a total of 5 Penn alumni at my gym!)

Anyone out there have any stories where you've randomly met Penn folks because of some sort of Penn piece of wardrobe you were wearing? Comment below!


(Alumni out there, you know you're still wearing the one you bought when you were an undergrad. Time for a new one!)