Todd Lieberman's Appearance (and Win!) on Last Night's Award Show ...and How Ryan Reynolds Shouted His Name Out (VIDEO) 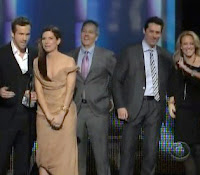 Listen to Ryan Reynolds give a shout out to producer Todd Lieberman (C'95, Mask and Wig, AEPi) on winning Best Comedy for The Proposal on the 36th Annual People's Choice Awards. (Todd is standing next to the blond haired director of the film)