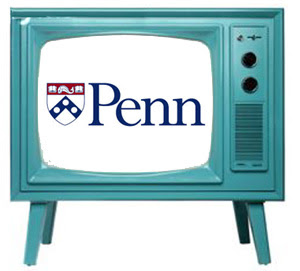 As I continue to be inundated by TV promos, I'm realizing that there are a good number of alumni both in front of and behind the camera...

Click here to see what we've got going on...

Becki Newton (C'00) is back as Amanda on ABC's Ugly Betty.

Rob Forman (C'06) is encouraging everyone to watch Big Shots (the show he works for) on ABC. Check your local listings for times.

Watch out for Liz Banks (C'96) to return to Scrubs this season as JD's (Zach Braff's) pregnant girlfriend, Kim.

Joey Volpe (W'09) recently emailed me to let me know that he worked on The Bachelor this summer and that we should all check it out on Mondays on ABC.

In addition to America's Most Smartest Model mentioned above, Mark Cronin (Eng '86) also has another 2(!) shows: I Love New York 2 on Monday nights at 9 pm on VH1 as well as Gotti's Way. Check your local listings for times.

Gabriel Mann (C'95) will be writing music for Carpoolers on ABC (his first credit as a composer!)

Will Frank (SEAS'06) appears as one of the "geeks" on this season's Beauty and the Geek. Check your local listings!

CBS has ordered Mike Sikowitz's (C'88, Sigma Alpha Mu) pilot called My Best Friend's Girl - A comedy series about a guy who falls in love with his best friend's ex-wife. Mike's credits include being a writer/producer for The Class and Grounded for Life.

A few years ago, my (former) writing partner and I attended the pilot taping of a show Mike had called Grown Men - a single-camera comedy about a group of five frat brothers who meet up at a friend's funeral. I really liked the pilot but it wasn't picked up.

Alumni out there, do you have something on the TV Schedule? Add your comment below! 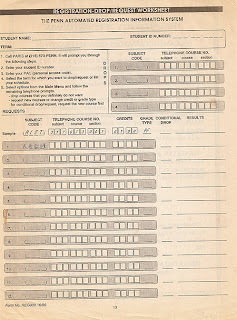 I just read in the DP online today that Penn in Touch, the current system students have been using for the past 15 years for class registration is needing a makeover.

It has to be better than P.A.R.I.S., the Penn Automated Registration Information System they had when I went to school in the early to mid 90s. (take a look at the image above to see the worksheet we had to fill out before dialing into the system!)

I guess times have changed... but maybe by not that much?!

Kind of like Oprah's book club, but for Penn alumni... 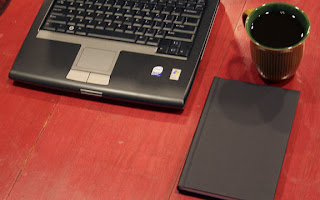 When I was back at Penn in the early to mid-90s Penn didn't have cable in the quad, a cafeteria in Rosengarten library ...or a thriving writer's community.

All of that has now changed... but most notably, the writer's community part.

Over the years. through emails and his visits to Los Angeles, I have been able to see how Al Filreis (Writer's House Founder, Kelly Professor of English) has created quite the active community for writers... on campus as well as online.

The latest from Al for alumni and Penn families is the Kelly Writers House Online Book Groups. This includes:


Some quotes about the club:
"Thanks for a great introduction to using the Internet as more than a place to shop. I really enjoyed the class and the stories, but even more so the interactions among the participants."--Tara Harper (Law '93)

"These groups have the feel of a new type of groundwork being laid."--Alberto
Fernandez (C'74)

Get the latest scoop from DuelingTampons.com delivered to your email box everyday! (click here to see a newsletter) 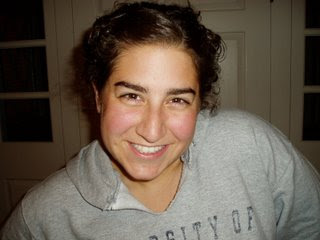 The more I write about alumni and undergrads, the more I'm realizing that not only is there a lot of talent out there, but our Penn folk have some powerful opinions and voices.

One such alum is Caroline Rothstein (C'06, The Excelano Project), a spoken word poet currently living in New York City. Her poetry is honest, real, personal, and political.

...Listen to the power behind her poem below, "They Call Me Granola" (put your headphones on..not safe for work). This is great...:


This past year, Caroline also self-published a book of her poetry called "What I Learned In College." Books are $5 and can be purchased by emailing Caroline directly at caroline.rothstein@gmail.com.

In addition to spoken word, Caroline keeps a blog that she began upon moving to Atlanta. You can find her adventures throughout the United States and deep into the streets of Manhattan.

Listen to more of her poetry HERE

Learn how Caroilne got started in "spoken word" HERE

Read "Life Worth", an excerpt/poem from Caroline's chapbook* "What I Learned in College"HERE

*A chapbook is a book of poetry. It's typically a book that a poet puts out on their own, so mostly self published/printed, etc.

He walks down Central Street in Highland Park, Illinois –
a brand name sidewalk with affluent stores
He knocks on the pharmacy window to buy Gatorade and a bag of pretzels but they wave him away –
It’s 4 PM on a Sunday and they are closing up shop

A senior at his high school pulls an illegal U-Turn
An elderly man stops short to avoid collision, skids onto the curb,
and throws my brother into the side of a store building
His head cracks open, his eyes close shut,
and his sneakers fling into the air as his spleen develops cuts
They do brain surgery, put him on respirators,
Rabbi Mason prays by his ICU bedside but he never wakes up
I’m crouched over his bedside begging him,
Yelling at him “Josh, wake up! Josh, please, wake up!”

He was only shoe shopping,
Walking side by side teenage girls that purchase emaciation on a hanger,
Which is really just a metaphor for
Shirts sewn in sweat shops by starving children
And studies say that executing killers costs more than
Keeping them in prison for the rest of their lives
And funeral prices are on the rise:
Cremation packages start at 2000, the average casket is 6000
28 dollars a month to purchase an orphan on the internet
13 bucks for a Japanese picture bride to weed the fields and strip sugar cane
Not too much for a mail order bride –
Choose her nationality, her body shape, and human pedigree
And since this is an unregulated business,
I don’t have fancy statistics to insert here: ____
About how many women are bought by strangers yearly
As we get a price check in aisle five
To bargain lives that we further judge when they die

My family goes to trial so the killers can pay for our loss in insurance
There’s no way to judge but the judge sits there asking me:
How much was his life worth?
My fifteen year old brother had 20, 000 dollars in savings
From selling beanie babies at a hundred times their cost
On an ebay auction block
650 dollars to buy an African teen on a Southern auction block
How much is a life worth?

And judge their worth in finances even though
The only bank in heaven is the locked vault of karma
The only currency in heaven is a set of intangible beliefs
The only worth in heaven can’t even be proven
How much is a life worth?

Josh, wake up, Josh, please wake up
How much is your life worth?
It’s worth waking up every day to face the misery of death’s reality
It’s worth becoming straight edge
to never miss a single moment of sobriety
It’s worth my living breath to overcome death
Josh, you are what my life’s worth

Get your Pennfest tickets today!

Advertise your business at Pennfest 2007!

Check out photos from past Pennfests 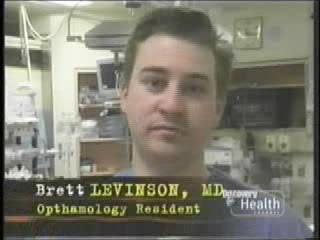 I just found out that my friend Opthamalogist Dr. Brett Levinson (C'97, AEPi) was another doctor featured on a TV show.

A few years ago (better late than never!), Brett was featured on a Discovery Health Channel show called The Critical Hour. Filmed "on location" at the Shock Trauma Hospital at the University of Maryland in Baltimore.

At the time, Brett was a senior resident on-call for trauma for Ophthalmology during the filming. According to Brett, he is now in private practice, and doesn't see much trauma anymore.

Click to see what other 1997 Penn grads are up to 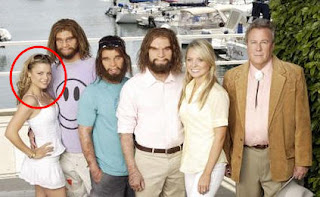 Next Tuesday (October 2, 8 pm), Stephanie Lemelin (C'01) stars in the ABC comedy, Cavemen. (she's circled in red in the picture above)

Lots of Penn alumni in TV this fall.. .from writing to acting to producing to directing. Stay tuned for stories to come....

Click to see what other 2001 Penn grads are up to